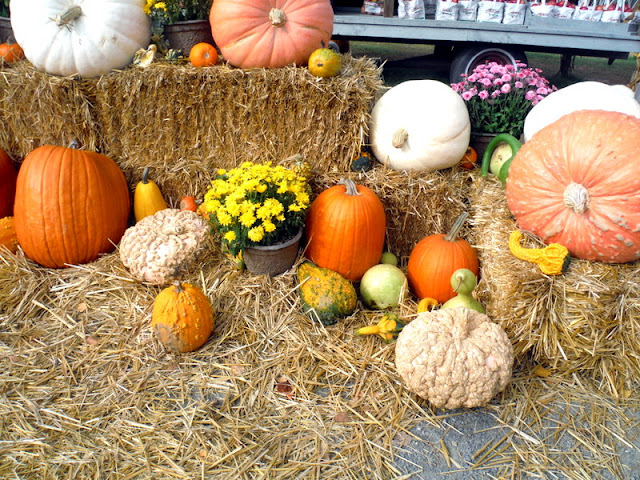 Living in New England, I really love the very distinct four seasons, and love certain things about each and every one.  But I'd have to say autumn is my favorite.  After a fun day of apple picking with my daughter a few weeks ago, it was time to create some seasonal favorites.


Apple Dumplings
Dumpling mix:
2 cups original Bisquick mix
2/3 cup milk
Stir ingredients until dough is formed.
Then drop by spoonfuls into hot, slightly bubbling apple sauce that has been warming on the stove in a large pot. Turn heat down to a low simmering bubble.  Cook uncovered for 10 minutes.  Then cook another 10 minutes covered, or until done.

I get 9 dumplings from this recipe.  Each spoonful of dough is just a little bigger than a golf ball. They do expand while cooking.
Tip - depending on the size of your pot, these dumplings might take a little longer to cook.  I tend to cook about 15 minutes uncovered and then 15 covered.  To check dumplings, poke a toothpick all the way through to see if any batter sticks to it.  You can also cut one in half to see if it's done.
Another Tip - After they are done I remove them from the heat and let them set at least 20 minutes or more before serving because that apple sauce is hot! And with the dumplings sitting on top of it, it really keeps the heat in. Then to serve, scoop out a dumpling into a bowl with as much or as little applesauce on it as you like.  So good!

Homemade Apple Sauce:
I hate to tell you, but I don't really have any measurements for you here.  I use Macintosh apples.  I fill a large stock pot about 2/3 to 3/4 full of peeled, cored, and cut apples.  I add some sugar and cinnamon, not too much as you can add more later.  (How much is too much?  Well, I start with about a cup of sugar, and I do tend to add more later.  Taste it as it cooks.  It really will depend on how tart your apples are and how sweet you like it.)  Then add enough water to come up maybe barely an inch at the bottom of the pan, that's it. Less if you like very thick apple sauce. You can always drizzle a little more water in it while it cooks if you feel it's too thick.  Cook on medium heat, stirring often to prevent sticking or burning.  Every now and then taste (but blow off to cool first! It's really hot!) to see if you need to add more sugar or cinnamon.  That really just all depends on how tart or sweet or spicy you like it.  Cook to your desired texture .... do you like a few apple chunks in it?  Or cook until all broken down and smooth.  Do you like adding allspice, nutmeg, or anything else?  I prefer plain sugar and cinnamon, but you should make it how you like it.
You can then use it to make apple dumplings.  So good!  And store the rest in the fridge for a nice breakfast or snack.  It will last in the the fridge a good 4 days.  I can't say if it lasts longer than that since ours is usually gone by then.  I would freeze some right after cooking (and cooling) if you think you won't use it all within about 4 days though. It makes about a half pot of applesauce by the time it cooks down. 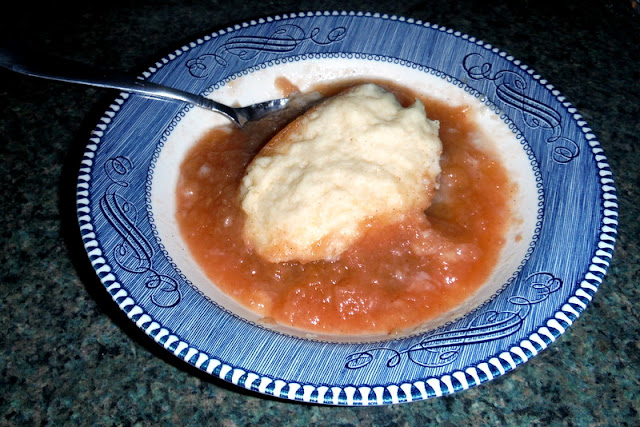 While it's not quite as much fun as making them over a fire, you can do s'mores in your microwave, which can be a fun thing on a rainy day.  But remind the kids...it doesn't take long to cook!  As you can see, ours were a little overcooked and goo'd right out the sides.  But the mess is all part of s'mores, right?  We used cinnamon graham crackers to add a little autumn spice to ours, and for fun, orange colored marshmallows. Now, if you ever find pumpkin spice marshmallows, those would be amazing to try with a s'more! We also had a choice of milk chocolate or white chocolate, and the addition of candy corns, if you like your sweets extra crazy sweet!  (A cup of black coffee sure goes well with this treat.) 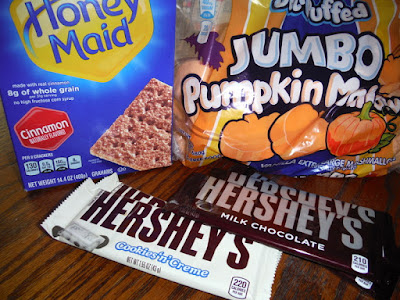 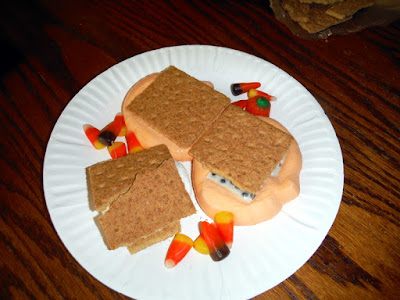 I love decorating around the house for the seasons and holidays.  My kitchen is looking like autumn with a few things changed around, such as back to my regular clock (instead of my summer mermaid clock) and a nice pumpkin sign hanging up. 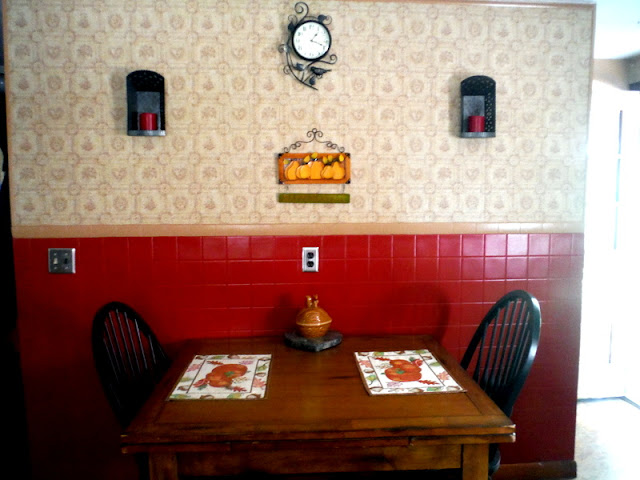 The candy dish below is ceramic and was painted by my great-aunt.  My mother use to set it out as decoration every year when I was younger, unfilled, so it's jack-o-lantern face shows.  But my family loves it filled with candy corns and the autumn mix. 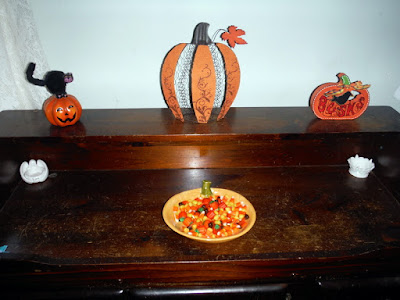 And a sweet friend made me a lollipop ghost.  I love those.  They remind me of trick-or-treating a long time ago. 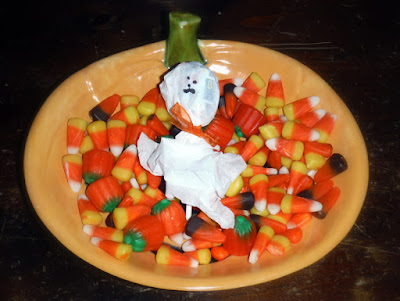 Laurie
This profile pic shows a few of my favorite things .... cats, coffee, and books/magazines...I also love cooking for my family, dabbling in arts and crafts, and being with family and friends. (Just a note to viewers from the EU...this wesbite does indeed have cookies, so please be aware of that. It's not my choice, it is blogspot's thing. Thank you.)